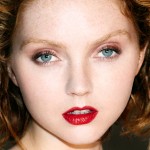 “She is variously described as an actress, model, activist and academic. For certain, Ms. Lily Cole’s career has consistently defied the norms.  As a model, Ms. Cole worked with the most prestigious brands, such as Alexander McQueen, Chanel, Louis Vuitton, Jean Paul Gaultier, Marc Jacobs, Prada, De Beers and Moschino. She was booked for her first British Vogue cover at the age of 16, and continues to

work the runway, most recently taking part in the London Olympic special project’s Closing Ceremony.  In recent years, Ms. Cole has emerged as a talented young British actor, working with some of the most acclaimed international directors working in cinema.  Quietly focusing on her film projects, she has steadily carved a reputation for herself as a name to watch with a solid archive of work to her credit, including starring in lead roles in the films The Imaginarium of Dr Parnassus, Rage, Snow White and The Huntsman, Confessions Of A Child, and The Moth Diaries.

Ms. Cole has also achieved great academic success when she graduated with double first class honours in History of Art from Cambridge University in 2011.  Her passion for the arts extends from her studies well into her life.  This includes the art of giving.  Ms. Cole has strongly supported charities for many years, most specifically the World Land Trust and The Ethical Justice Foundation, to whom she is now a patron. She is passionate about fair-trade and sustainability in business, having co-founded the ethical clothing line, The North Circular.  As a result of her long-term commitment to ethical causes and her work as an activist and environmental campaigner, Ms. Cole was chosen to be the first-ever global brand advocate for the eco-conscious beauty brand The Body Shop. This partnership, launched in March 2012 and will continue forward into 2014, with Ms. Cole working alongside the brand to help solidify their commitment to using business as a force for good.  Ms. Cole now serves as the inaugural Goodwill Ambassador for Beauty 4 Empowerment.”